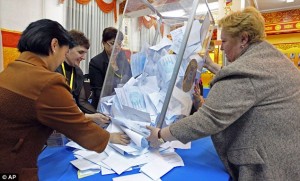 Having been in power since 1989, Nursultan Nazarbayev, President of Kazakhstan proposed in the spring to bring the 2016 presidential election forward. Needless to say, the puppet parliament approved the proposal and announced an election will be held on April 26th. Last week the list of 3 candidates eligible to stand in the election was announced and the official campaign started. However, the election is no more than a plebiscite intended simply to prolong the presidential term of Nazarbayev.

Background to the early election

The decision to call an early election was not taken lightly by the Akord (Presidential administration) but was motivated by concern about the deepening of the economic crisis and further fall of the oil price as well as by the increasing enfeeblement and poor health of the president himself.

The Bonapartist (authoritarian) regime is at the peak of its development, with all the power, capital and property concentrated into the hands of the president and his close entourage. All, even potentially dangerous figures and groups around whom opposition could emerge, have been neutralised, broken up or liquidated. It appears as if the ruling elite is consolidated as never before. But those close to Nazarbayev, his relatives and henchmen are worried about what state he will be in in a year, whether he will be able to conduct a campaign, if there is a growth of discontent and widening social protests in the country. For this reason, the presidential plebiscite has been brought forward, when there is the lowest possible political activity in the country and whilst it is still possible to hold the tenge (currency) artificially high, before devaluation takes place. The elite hope their actions will keep the presidential throne within the family and form a dynastic system for the transfer of power in the country.

If there is the death or long term hospitalisation of Nazarbayev after the election, there will then be no need for a new election as, according to the constitution, either the speaker of the senate, the speaker of the mazhilas (parliament) or the prime minister takes over as acting President. By serving out the rest of the term, they then  gain several years in which to prepare for their own election.

Preparations for this early election have been going on for some time. At the end of last year, Nur Otan (ruling party) presented its new programme “Nurli Zhol” (Path to the future) at the same time as Nazarbayev’s daughter Dariga was promoted to head Nur Otan and to the position of deputy speaker. The political arena was purged with the suspicious death in custody in Austria of the oligarch oppositionist (and Dariga’s ex-husband) Rakhat Aliev, the extradition from France to Russia of the other oligarch oppositionist , Mukhtar Ablyazov, and the banning of the activities of the country’s tame “Communist” party.

The entourage is rushing, afraid that they have little time left before the re-emergence of protests and the workers movement whilst the president is still around, so they can re-arrange their forces and ensure stability if he has to leave. Whether their plans will succeed is under much doubt.

This pseudo-election, even when compared to all other elections in the country which have never been honest, transparent or genuinely competitive, is the first in which the president’s office has not even bothered to pretend there are alternative candidates. The leader of the “United Social Democrats”, Zharmakhan Tuyakbai, and of the pro-Nazarbayev “Ak zhol” party, Azat Peruashev, and even the “ecologist”, Mels Eleusizov, have all refused to run. The first two are maybe waiting for next year’s parliamentary election, and are concerned that a low vote this time will discredit them.

In this situation, when political activity is very low, with the complete collapse of the liberal bourgeois opposition and the banning of the old ‘Communist’ party, the presidential administration has had to put up sparring partners from within its own ranks. The first of these is Abelgazi Kusainov, the former akim (mayor) of Karaganda and now head of the “Trade Union Federation of Kazakhstan” – a grey candidate, a complete product of the bureaucratic system who was appointed to head the state supported trade union as part of the president’s 2013 reforms of workers’ rights in his “Society of Universal Labour”. The aim of this reform was to strengthen the undemocratic state-sponsored union to prevent a repeat of the 2011 oil-workers’ protests. It was accompanied by the introduction into the criminal law of the country of the criminalisation of independent trade union activities.

As akim of Karaganda, Kusainov did all in his power to prevent strikes and protests by the workers, he continued this activity against the workers of Zhezkazgan. Workers also experienced his actions when, in 2003 as minister for trade and industry, he helped to liquidate and asset strip the Irtyshskii copper foundry.  As a bureaucrat and member of the Nur Otan ruling party, he heads the trade union as a representative of the mining companies and oligarchs to prevent the development of a genuine workers’ movement. His nomination is useful too, as it enables the regime to present an image of alternative elections to the west – “look we even have a trade unionist and a communist standing”.

The “communist”, according to the head of the communist faction in the parliament moving his nomination, is a “real Leninist”. But Turgin Syzdykov, head of the puppet “Communist Peoples’ Party of Kazakhstan” is an even greyer and less known candidate than Kasainov. His party’s approach to the “Society of Universal Labour” stresses their support and only complains that it doesn’t  implemented things properly. His candidature is proposed only, it seems, to give the impression that there is a “left” candidate.

Most importantly, both “alternative” candidates call for support for Nazarbayev in the election! Even Kazakhstan has not seen such a farcical circus of an election before.

The struggle under the covers continues.

Even though on the surface it appears that the ruling class has reached agreement for the election, the permanent war between the different groups is continuing behind the scenes. After the election, it could blow up again. Talk here is not about a complete split in the ruling class, but a confrontation between the different wings of the ruling family. Two wings have their eye on the throne – elder daughter Dalgira, deputy speaker and head of Nur Otan on the one side and Nazarbayev’s “middle” son-in law, Timur Kulibayev, and his ally the Prime Minister, Karim Massimov, on the other.

All other figures and palace oligarchs circle around these two main forces, the battle for the throne will be determined by who supports whom and this makes the question of whether the ruling elite will be able to maintain stability after the handover very debatable. An open struggle could lead to the activisation of the various regional groups, who up to now have been weakened by the purges and repression.  It’s not accidental that at a recent outburst by football fans in Aktobe, provoked by the regional clan elite, the demand for the separation of the territory of the region from the rest of Kazakhstan was raised.

Of course, a key factor in developments which cannot be ignored is the development of a politicised workers’ movement and social protests. This includes in particular the rural unemployed youth and internal migrants who are already capable of gathering in thousands at a moment’s notice. In the situation when the living standards of the masses falls, when production is dropping, unemployment increasing and the government is pushing through a programme of budget cuts and privatisation of the health and education systems, a protest movement could take on a national character, especially in the event of the death or long hospitalisation of Nazarbayev. Protests in Uzbekistan or Kyrghizia could also influence events.

In preparation for such developments the police and internal troops are being strengthened, weapons are being purchased in Europe. The new criminal code is being implemented in which there are seven specific points against the independent workers’ movement.  At the same time, the ultra-right nationalists are being built up, who, supported by the authorities and political police, are filling the social networks with a multitude of publications and resources with the aim of splitting ordinary people from each other, of diverting the Kazakh speaking youth away from active protests.

So there is no point in expecting these early elections to lead to any miracle of eternal stability and regime conservation or panacea from social shocks and instability at the top. On the contrary, they are no more than a convulsive attempt to maintain power at any cost in an attempt while there is still a chance to form a dynastic system.

Our tasks and the demand for a workers’ party

Clearly any participation in this circus spectacle is meaningless. It is clear that it is necessary to call for a boycott of this election, for people not to vote and to use the opportunity for maximum propaganda against all the candidates. Nevertheless, this plebiscite demonstrates again the political vacuum in the country, the complete lack of any opposition organisations and candidates, who can represent the interests of workers and the wider layer in society.

We can already see important developments with several different processes merging: the oil-workers are regaining their confidence with the release of their last prisoners, the beginning of some as yet localised strikes, the mass resignation from the state supported trade union, a general politicisation with the ignoring of the election and instead the raising of calls for the setting up of political workers’ organisations in the country. These important developments and changes in political consciousness underline that it is not enough just to call for a boycott, but to argue for the need for the self-organisation into class-based independent trade unions and to begin the discussion about establishing a workers’ party based on a socialist programme.

By posing the question in this way, we are reflecting the attempts by workers to unify their forces, to defend their rights and interests, to the need not just to defend their interests but to organise new large scale strikes and protests and the fact that the mass of oil-workers as well as many other workers across the country see how farcical these elections are.