Report from Day one of housing protest in Astana

Today, activists of the ONJ – the organisation known as ‘Leave the People’s Homes Alone’ – from various regions of the country, have been trying to get a meeting with the candidate for the post of president, namely Nazarbayev.

All entrances to the President’s office and the House of Ministers were blocked by police.

As on 19 March this year, ONJ members communicated through a presidential aide, N Onjanov, that they wanted to meet the person who is standing for the highest state position. But Nazarbayev, according to this civil servant, was very busy and was today visiting the area of Semey. 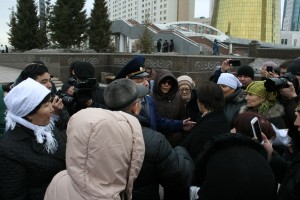 The Attorney of Yesil district received a clear declaration from the activists that mortgage-holders were seeking a peaceful meeting and the authorities had nothing to fear. In response, the Attorney issued a warning to them. With this, the exchange of courtesies almost came to an end, apart from both sides photographing and filming each other.

Then Mr Terenteyev, a Departmental Director, appeared on the scene to clarify the programme adopted by the government and the National Bank of the Republic of Kazakhstan, that has to be ‘worked on’ after the election. He began to address the housing activists, avoiding the questions they asked him. He just kept going on about the $130 billion being paid out and that the money will go to the socially vulnerable – people with health disabilities, mothers of large families, veterans and invalids from the Great Patriotic War and mortgages would be renewed at 3%!  This is what it was like. (He was videoed as he spoke.) 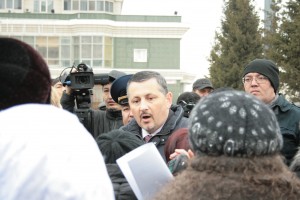 To the questions of when would ordinary mortgage-holders like teachers, nurses and other workers, who make up the majority of borrowers hit by the financial crash, be in a position to pay their loans from their wages, there was no concrete answer from the official.     Then he thanked each ONJ activist by name and in every sentence repeated that without their struggle and their participation in the working group, there would not have been any help along the way and invited them all to go with him to a hall for further clarification about the programme for refinancing mortgage loans yet to be adopted. Apparently he was frozen, being from Almaty and unaccustomed to the cold.

Saying he would give up his return ticket, bought with public money, the official promised to remain in Astana to explain further the measures taken that have actually profited the banks (although no one had asked him to!).

Today, there was no provocation from the special branch. And the loans demonstrators gave them no cause for making arrests.

Thanks are due to all in Astana who have expressed their support and given food and shelter to the demonstrators.

Tomorrow is another day of protest. Same place from morning to evening. It remains to be seen if the president makes any response.