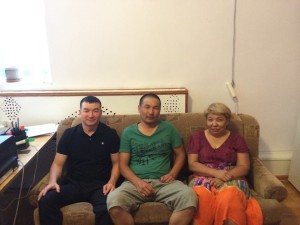 On 19 March, a court in Aktau decided to parole the last two remaining imprisoned oil workers from Zhanaozen. Naryn Zharylgasynov and Kanat Zhusipbaev were convicted for involvement in a nearly eight-month strike of workers in 2011. It appears that the paroles are linked to early presidential elections and the authorities wanting to give the appearance of the regime relaxing its authoritarian grip.

The freed workers expressed special thanks to the Mangistau regional Aktau trade union leaders who were constantly in touch with them and to Paul Murphy, a former Member of the European Parliament for the Socialist Party of Ireland (CWI) who is now a member of the Irish parliament . He visited Zhanaozen and also moved three resolutions on the massacre and injustices there at the European parliament as well as speaking at numerous conferences and events in support of the convicted workers.

Within two weeks, both workers were due to meet their comrades and fellow workers, as well as Aktau trade union leaders. It will mark a day when forces can begin to be gathered to start a new phase of struggle.

It is clear that this is not the end of the oil workers’ struggle.

The fight for the full rehabilitation of the convicted members of the heroic oil workers’ strike must go on, calling for nationalisation of the mining industry under workers’ control, for trade union freedom and the creation of a trade union-based workers’ party.

The demonisation of oil workers by the regime must stop! They are fighters for the cause of the working class in Kazakhstan! The fight must go on to get an independent investigation into the mass shooting, torture and disappearance of strikers and local people on 16 December 2011.