Campaign Kazakhstan activists in Austria held a protest at an international football match, on 16 October, between the national teams of Austria and Kazakhstan. The protest was to highlight the role of the undemocratic regime in Kazakhstan. Kazakhstan is Austria’s biggest oil trading partner and Austrian companies are eager to profits by trading with the Kazakh regime. Exports to Kazakhstan are expected to be worth 700 million euro a year.
Kazakh oil workers have been in struggle for better working conditions and for democratic rights for more than a year. The Kazakh regime, which is being wooed by the Austrian government and officials, uses brutal force to repress protests in Kazakhstan. On 16 December 2011 dozens of oil workers were brutally murdered by state forces in western Kazakhstan.Campaign Kazakhstan activists in Austria and the Socialist Left Party (the Austrian affiliate of the Committee for a Workers‘ International), held last night’s protest in solidarity with the Kazakh workers. Activists from Campaign Kazakhstan displayed a large banner at the Austria-Kazakhstan football match which read: “Жаңаөзен мұнайшыларына – бостандық!” (Freedom for the oil workers of Zhanaozen!). The banner could be seen during the singing of the Kazakh national anthem before kick-off and also during large parts of the football match.  In recent months, similar protests during football fixtures involving the Kazakhstan national team where held by Campaign Kazakhstan activists in Belgium and Sweden. Further protests are planned during the visit of Kazakh president Nazarbayev to Vienna from 22 to 23 October. 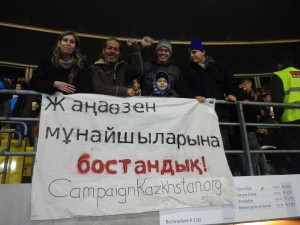 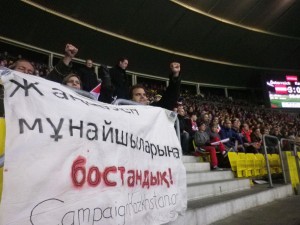 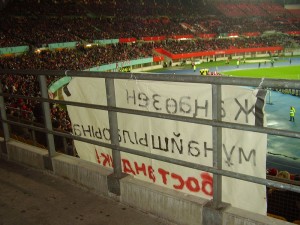