“The real wealth of a country is its people, not the minerals beneath the ground”

Alfia Nakipbekova, from Kazakhstan, has become widely known as a cellist who plays both classical and innovative new music. On Tuesday, 2 October, she is performing with her group, Cellorhythmics, to help raise funds for the families and colleagues of the oil-workers killed last December in Zhanaozen, Western Kazakhstan. Earlier this year Alfia was interviewed by Esenbek Ukteshbayev, president of the independent trade union federation in Kazakhstan – Zhanartu. We carry some of her comments. 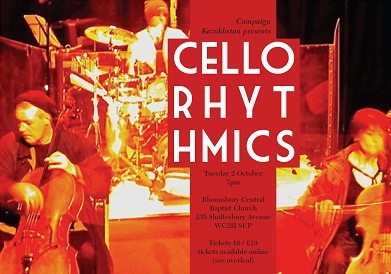 I left Kazakhstan in 1981. By 1995, after the Soviet Union had collapsed, it was possible to return home. It seemed that at last there was hope of a great future for Kazakhstan. The window was wide open to life, to achieve things in all spheres – social, cultural, economic.

The barbarous slaughter in Zhanaozen of 16 December, 2011, when unarmed striking workers and local residents were shot, represented the apogee of this nightmare.

As to whether I still feel like a daughter of Kazakhstan and want to help in times of trouble, I would adapt an English saying about Yorkshire and apply it to myself: “You can remove someone from Kazakhstan, but you cannot remove Kazakhstan from them!”.

Sometimes I hear people saying, how can she have the right to speak about Kazakhstan, if she is no longer living there? Why does she get involved in politics and give her opinions? How can she judge what’s happening in Kazakhstan, living abroad?

One of the most important reasons for my activity in criticising what is happening is the anxiety and pain I feel about Kazakhstan. From the outside, not living day to day in this environment, and being exposed to its effects, you see especially acutely the decline of human values.I think that particularly now it is very important to be socially active; passive acceptance of injustice and oppression is silent acquiescence, complicity in the crime.
I hear about the starving Kazakhstan people, the sick without health care, young people without access to good education, elderly people begging, humiliated citizens … and it has become the norm, commonplace. Reality is what has been created over 20 years of irresponsible government, with the president ravaging the land, abusing the people, promoting and encouraging corruption, stealing, ignorance. There are the ‘haves’, who have their own laws, and the ‘have nots’ – the citizens without rights, with no present and no future.

I have often heard statements, especially when people criticise the injustices of the existing order, like: “Well, the people get the rulers they deserve!”. In a broad philosophical sense, perhaps it is true, but in the present context, no. It is damaging and wrong for two reasons: first, it promotes acquiescence – acceptance of what is unacceptable, and secondly, it indicates disregard and even contempt for the ordinary people.

People deserve better – not just good, but the best!

Our country is going through a hard trial. Those who make it through this difficult time with their spirit unbroken will become the foundation for a new society. The true wealth of a country is, above all, its people and not the minerals beneath the ground.

A very meaningful quote, from a reader of the journal “Azattyk”, expresses my deepest wishes for Kazakhstan: “Return to the country, the stolen billions and build factories and workshops, give financial support to every newborn child, give decent pensions and medical care to the population, feed school children free of charge, give land to farmers and interest-free loans, give support to the expats who return to their home land – and then everyone will begin writing odes and be proud of their country, and not be ashamed of being ‘Borats’!”

To this I would add: “Free our noble heroes – the poet, national hero and martyr, Atabek Aron, the great heroine, Rosa Tuletaeva (one of the Zhanaozen leaders), and many courageous people, who are fighting against injustice and corruption, the true citizens of Kazakhstan – a country that can be an example to the whole world!”.