Protest at Kazakh embassy in Berlin: Free Vadim Kuramshin and all political prisoners!

Last Thursday, a protest was held in front of the Kazakh embassy in Berlin, Germany, to protest against the recent wave of heavy prison sentences against striking oil workers and their sympathizers who have participated in the Zhanaozen demonstration on December 16, 2011. During the demonstration, police and military forces shot into the crowd with live ammunition, killing dozens of protestors – but those now facing heavy sentences were peaceful participants who did not bear arms!

Campaign Kazakhstan, along with German MP Andrej Hunko (Die Linke), organized the Berlin protest, which was attended by trade union activists from ver.di, junge GEW and IG Metall, as well as members of the Left Party youth wing, Linksjugend ‘solid, and SAV members (German section of the CWI). Additionally, a Kazakh artist currently living in Berlin joined the rally.

Participants spoke about the independent Kazakh trade union organization, Zhanartu, and the recent strikes and protests in Kazakhstan. We also pointed out that the death of well known Kazakh activist Takhir Mukhamedzyanov is seen with suspicion by many in Kazakhstan, and gave our condolences to his family, friends and comrades. Campaign Kazakhstan calls for an independent inquiry into the circumstances of Takhir’s death, as well as of the Shanaozen massacre.
A protest letter signed by CampaignKazakhstan, Andrej Hunko MP, Alexandra Arnsburg of Berlin-Brandenburg ver.di executive committee, and junge GEW Berlin union was handed over to the ambassador.

Video of the protest (in german): http://www.youtube.com/watch?v=f8-KJ5dhoyE 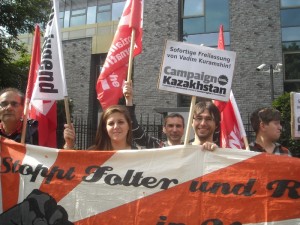 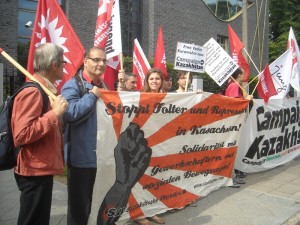 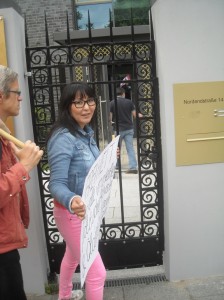 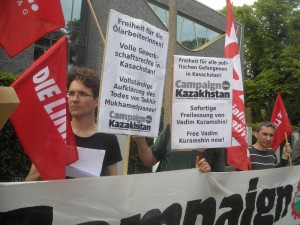 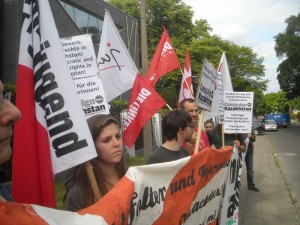 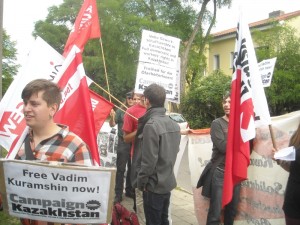 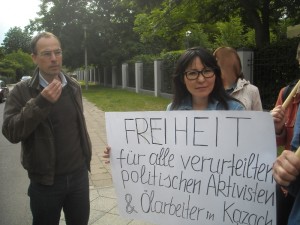