Kazakhstan’s dictator Nursultan Nazarbayev is currently (7-8 February) on a state visit to Berlin to sign economic deals about rare earths with German Chancellor, Angela Merkel. Campaign Kazakhstan organised an angry protest picket and rally when Nazarbayev was due to speak at a bourgeois think-tank on 7 February (see also video of protest [in german]), the German Foreign Policy Society (DGAP). It was primarily to protest against his regime’s crackdown on workers and activists after the brutal massacre of striking workers at Zhanaozen on 16 December last year, but also about the links between the German government and businesses with the Nazarbayev dictatorship. Hans-Dietrich Genscher, the former German foreign minister from the Liberal Party and Michael Glos, former minister for the economy from the Christian Social Party, were also at this meeting with Nazarbayev.
by Jan Hagel, Berlin

The picket of about 50 people was attended by trade unionists and socialists from the public sector union Ver.di, teachers’ union GEW, metalworkers’ union IG Metall, Die LINKE (the Left Party) and Sozialistische Alternative (CWI in Germany) as well as human rights activists. The Kazakh embassy sent a group of “young Kazakhs“ to support Nazarbayev, but their faint praise of the dictator was easily drowned out by chants of “Nazarbayev – murderer, Merkel – accomplice!”, “German companies and German money are involved in murder across the globe!“, “When capital can make a profit, dictatorships are tolerated!” and “International solidarity!“.

Andrej Hunko reported on his visit to Kazakhstan as an election observer for the Council of Europe in January. He had visited union lawyer, Natalia Sokolova, in prison and held a press conference with human rights activists including Vadim Kuramshin, who was himself jailed just days after Hunko’s departure. He also spoke of the stains of blood he saw on the ground in Zhanaozen where scores of fleeing protesters had been shot in the back by police and army units.

Several speakers stressed the importance of the heroic oil workers’ strike, the longest in 20 years in any CIS country, and of the oil workers’ calls for nationalisation of the oil industry, the creation of independent workers’ organisations and international working class solidarity. The protesters vocally condemned the massacre of at least 70 strikers and supporters on 16 December and raised the demand for an independent investigation.

Anna Shadrova called for further solidarity actions and donations to Campaign Kazakhstan to support the organisation’s fight for democratic, social and workers’ rights. Money was also urgently needed for strikers and their families and activists forced into temporary exile by repression. 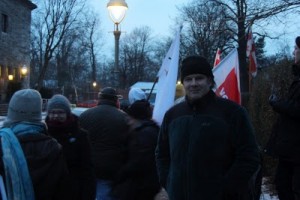 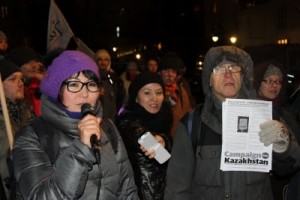 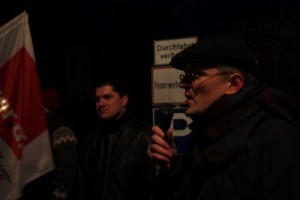 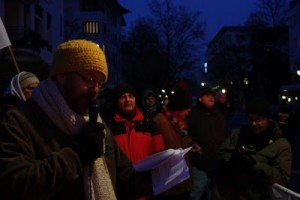 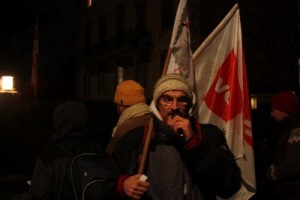